With 7.7 million new cases diagnosed every year and 47.5 million people living with it worldwide, dementia is a big concern. But, did you know that memory loss is NOT a normal part of aging?

What’s Normal and What’s Not?

Some older adults have a condition called mild cognitive impairment, or MCI, in which they have more memory problems than other people their age, but their symptoms are not as severe as those of people with Alzheimer’s disease. If  you have MCI, visit your doctor every 6 to 12 months to see if you have any changes in memory and other thinking skills over time. There may be things you can do to maintain your memory and mental skills. Signs of MCI include:

Dementia is the loss of cognitive functioning—thinking, remembering, learning and reasoning—and behavioral abilities to such an extent that it interferes with daily life and activities. Dementia is not a normal part of aging. A person with dementia may also have problems with language skills, visual perception, or paying attention. Some people have personality changes. There are different forms of dementia. Alzheimer’s disease is the most common form in people over age 65.

Alzheimer’s disease is an irreversible, progressive brain disorder that slowly destroys memory and thinking skills, and, eventually, the ability to carry out the simplest tasks. In most people with Alzheimer’s, symptoms first appear in their mid-60s. Estimates vary, but experts suggest that more than 5.5 million Americans, most of them age 65 or older, may have dementia caused by Alzheimer’s. Alzheimer’s disease is currently ranked as the sixth leading cause of death in the United States, but recent estimates indicate that this disorder may rank third. 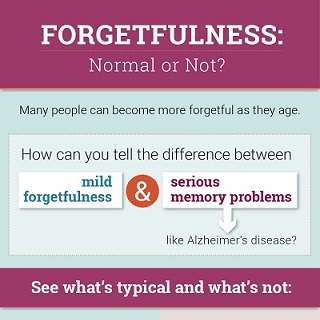 Read and share this National Institute of Aging‘s  infographic to learn whether forgetfulness is a normal part of aging.

How to reduce your risk of dementia?

Following are several lifestyle changes you can make that will help you reduce your risk of dementia:

Hydrate your brain. Your brain is about 75 percent water. It makes sense to hydrate it daily to keep it functioning at optimum level. Drink half your body weight in ounces of purified water on a daily basis.

Eat right. Provide your brain with all the nutrients it needs to carry its tasks into old age. Eat fresh vegetables and fruits, raw nuts and seeds, as well as healthy fat and protein (pastured, organic meat and poultry as well as wild-caught oily fish). Limit alcohol and avoid added sugar and processed food.

Exercise. Start by walking. Aim for 30 minutes of exercise three to five days a week.

Stay socially engaged. Research shows that those with a social network are less likely to develop dementia. Positive interaction with others stimulates the brain and helps it stay sharp. So, get out and about. Talk with others. Join groups. Maintain your involvement in clubs, organizations or your religious community.

Get enough sleep. Without adequate sleep you can’t form or maintain the pathways in your brain that let you learn and create new memories, and it’s harder to concentrate and respond quickly. Recent findings suggest that your brain stays remarkably active while you sleep removing toxins in your brain that build up while you are awake. So, stick to a sleep schedule. Sleep for at least 8 hours every night. Practice relaxation techniques, such as meditation, prior to bedtime.

Challenge your brain. Working, volunteering, reading, doing puzzles, playing instruments and learning new skills are great ways to keep your brain active and healthy. Paper activities such as Sudoku or crossword puzzles are excellent too. There are also a few apps that can help you preserve cognitive abilities. Try Two Dots, Bubble Ball, Cut the Rope or GamesfortheBrain.com.